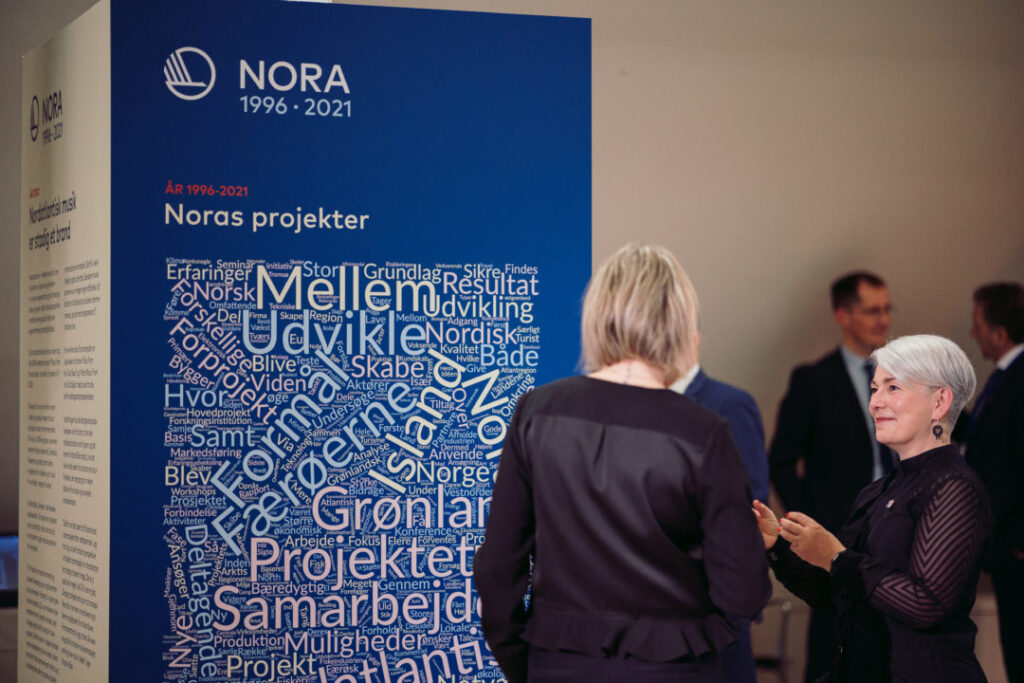 In 2021, we celebrated the 25th anniversary of the establishment of NORA, the organisation North Atlantic co-operation. The anniversary commemorates the decision by coastal Norway to join the West Nordic partnership that already included Iceland, Greenland and the Faroe Islands. The NORA constituents are linked by their geographical location, common traits and shared challenges, as well as their historical, institutional and cultural ties.

NORA’s overall purpose has always been to strengthen collaboration between stakeholders in the North Atlantic across professional and national borders and to strengthen the economy of the region while also promoting sustainability in all its forms. In accordance with the wishes of the Nordic Council of Ministers, NORA has a long history of collaboration with the communities that border the NORA area. The focus has been on Scotland and Canada, but the relationships extend as far as the US state of Maine.

NORA’s activities see it take on three different profiles: • the project-supporting NORA, which seeks to interact with as many groups in the region as possible in order to establish the critical mass of participants needed for progress to be made in NORA priority areas • the agenda-setting NORA, which influences the region’s agendas through strategic initiatives and the results of the projects it funds • the alliance-creating NORA, which fosters networks among stakeholders in the region in order to achieve the greatest possible synergy through co-operation and collaboration

Over the past 25 years, NORA has provided an average of 5 million Danish kroner in project funding annually, or around 130 kroner million in total.

Several of the projects that NORA has funded have brought a wealth of knowledge to the fore that can be highly valuable for a variety of industries and interest groups. Some have created alliances across industries, research fields and national borders. Others have focused on new and unexpected opportunities and issues. Not all of the projects have been commercially oriented, but some have shown themselves to have such potential that they were developed into firms that today have a value that far exceeds the amount of all of the grants NORA has ever made.

On 3 November 2021, NORA hosted a grand celebration at Nordatlantens Brygge in Copenhagen. As part of the event, a handsome display of a selection of the exciting projects NORA has funded gave guests the chance to read, hear and even taste what they were about.

In addition to the exhibition, guests were treated to an engaging discussion among the three veterans of North Atlantic relations: Iceland’s Steingrímur Sigfusson, Norway’s Eirik Fiva and the Faroe Islands’ Jákup Mørkøre. The westward-oriented relationship arose in the mid-70s and made significant progress in the 80s on the backs of the groups that emerged at that time to promote West Nordic collaboration. The discussion centred on NORA’s quarter century of experience as a project-funder and alliance-creator, as well as its future role of setting the agenda at the junction of political strategy and co-operation among the region’s civil-society groups.

LINK TO THE DISCUSSION

The engaging discussion focused on West Nordic co-operation in a historical perspective and was followed by a no-less-insightful presentation by sociologist Dennis Holm, who gave his take on the challenges and opportunities he sees in the North Atlantic region today and in the future. Among his observations: a trend among younger generations in particular to question today’s consumer-oriented society and for peripheral areas to become more of a viable alternative for those seeking work-life balance. In his opinion there is a focus on creating a strong connection between nature and society that will make outlying areas attractive for former residents to return to, and for new residents to discover. Holm believes that NORA will continue to play an important role as a facilitator that can forge ties between North Atlantic communities and draw attention to the region’s success stories.

As the grand finale for the evening, we had the exquisite pleasure of listening to a performance by the winner of the 2021 Nordic Council Music Prize, Eivør Pálsdóttir, from the Faroe Islands, who enchanted the gathering with her melodic voice.

LINK TO THE EIVØR SHOW